Thank God for Preachers Who Are Not Afraid to Preach the Truth in This Day and This Hour!

Yet Another Miracle for Sarah 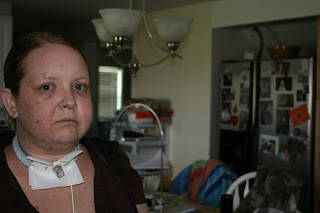 Amongst Sarah's trials and tribulations, she also had a bad tooth, in fact it had broken in half, and was giving her periodic bouts of massive pain, even prior to her hospital stay.

Once out of the hospital we knew she would be facing her hysterectomy within a few weeks time, and thought it best to arrange to get the tooth pulled. I contacted a local dentist, and was told that due to the fact the tooth was broken, it would be classed as a surgical removal, and that it would require $400 up front before they would even see her.

I contacted my son and his wife and they agreed to help Sarah, knowing that she has no dental insurance, and due to her health, and current circumstances plus no income either. So we set the appointment.

Then we went to the hospital for a post surgery check, with the anesthesiologist. We informed him that we were going to get her tooth pulled that week, he advised us against it, saying it might unleash infection into her body, before surgery and that wouldn’t be a good thing, so we cancelled the dental appointment.

Well as it turned out the hospital ended up canceling her surgery which had been rescheduled for Monday June 20th, due to the fact that no one had set her up with a pulmonologist to clear her lungs for surgery. So here we were playing the waiting game once again, yet trusting that God knew best and we must be patient.

On the evening of June 22nd, Sarah asked me to take a look at the gum surrounding her broken tooth, I could see that it was red, and suspected it was becoming abscessed, sure enough by the morning that side of her face was swelled up like a squirrel with a cheek full of nuts. (As you can see her left cheek in the photo was swollen)...I thought, “O Lord, what am I going to do, you know I don’t have $400, and I so don’t want to have to start going through the phone book, trying to find a dentist with enough compassion to be willing to pull the tooth with no money down.

Then just in a flash, the Lord dropped into my mind the name of a local dentist close to us, who we had all seen years ago, like over 20years ago. I looked for his name in the phone book and at first could not find it. I saw his parents number, then decided to browse the back of the book, and saw his office number and dialed it. He answered the phone, I told him Sarah's dilemma, in brief, he said bring her in, and transferred me to his secretary... she told me that they had been having phone trouble the last few days so had been routing all calls to the Doctors cell phone... I knew why they had been having the trouble...because God is Merciful, and he wanted me to be able to appeal to the Doctor, who recognized me because of my accent, and who is by the way a Christian.

I took Sarah into the dentists office at 11:45am, and he took one look and said yes it is abscessed, and needs to come out, it could not under the best of circumstances be saved since it was so damaged. Sarah was really scared, but the dentist was very gentle with her, and I prayed, and soon the bad tooth was out.

The Doctor told us that the anesthesiologist was wrong in regards to the pulling of the tooth before surgery, and that it was more beneficial that it be removed before she had the surgery. So now we knew one other reason God had delayed her surgery.

We then proceeded to the front desk where the secretary told us the total was $215 and it would be fine to make payments.

Saints this was all the hand of God, because He knew she needed this tooth pulled before she had her surgery, He knew we didn’t have the money right then, and He knew He had someone who would do it for less money, Praise His Holy name.

We can trust Him in all things saints...always!

Please continue to pray for Sarah, her recovery is slow due to her underlying conditions of Lupus and degenerative disk disease. Also since the accidental prescription drug overdose, they will no longer prescribe her pain pills for her back, even though I now control all her meds, and keep them in a locked box.  She needs another miracle, and God is able saints.
Posted by A Seed Sower at Sunday, June 26, 2011 7 comments:

Wolves run in packs, and they stick up for oneanother-Birds of a feather!