The Shame of Idolatry- Men Following After Men 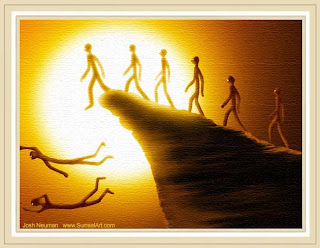 I have been amazed, and saddened over the years, as I have watched men and women follow after other men and women, without reservation. Like lemmings, they don't care if it leads them off a cliff or not.
I recall once being in a church years ago, when Copeland and Benny Hinn, Fredrick K. Price and others, were in their hay day, and how the people just fawned over these false teachers.
There were two sweet young couples in particular, who were just spell bound, and my heart was heavy for them, because I knew they were deceived. I also knew that all my warnings were being tossed aside, so the Lord dealt with me to invite them to my home for lunch, that He wanted to show me something.
Prior to this time, I had received some audio tapes, that contained these men telling their false hoods in their own words, one could clearly hear these men speaking blasphemy.
After we enjoyed lunch, and I had a captive audience, I played the tapes for them. They sat and listened and when it was over, they basically said, "We don't care, they have huge ministries, they have done this, and that, and we just don't care, this doesn't change our opinion of them."
In that moment God showed me that these people had made idols of these men, and even though they heard the blasphemy and the falsehood, they didn't care!
Saints we are still surrounded by people who set men up as their idols, and they just don't care when error is pointed out, they will follow who they will follow.
Listen saint of God, I don't care if the one your following walks on water, if they are found to be teaching error, or attempting to lead others astray from the truth, you'd better care, lest you be cut off with them in the end.
Follow no man but Christ saints.
Eli the priests family was cut off for all generations in the house of God, because His sons were vile, and he restrained them not. They sinned against the Holy Spirit of God ... Eli didn't do anything to prevent their sins against God and the people, and when he did speak to his sons they paid no heed ....God does not take these things lightly.
We are living in an hour where men don't care, women don't care, what goes on within the body, they idolize who they idolize, and who cares.....Well God cares saints, God cares!
Posted by A Seed Sower at Thursday, July 23, 2009