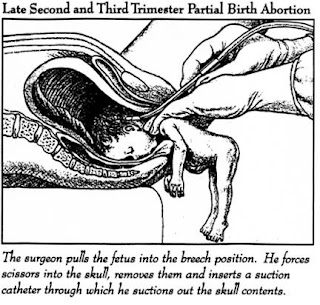 First it was murder the least amongst us, those who do not have a voice, the babies, we will just all turn our heads, and pretend it's not happening, after all it's legal, and they are a tad inconvenient right now, lets see what was one of the mantras ahhh yes I remember... "Why burden society with unwanted children, all children should be wanted children."...hummm

Now it is murder the least amongst us those who are to feeble to have a voice-the elderly....humm how long is it going to take the most liberal amongst us to convince the population that, that's alright to? Lets imagine the mantras, "If the elderly are not able to fend for themselves why burden society",
"Why prolong their anguish, lets be loving and put them out of their misery!"
"It will be painless, just like abortion, ....we can just inject them and they will just pass on peacefully".....hummm

If you find the depiction of partial birth abortion offensive, sorry, but it is Truth, it is fact, and it is what we have tolerated in this country and gone to our "happy place" to avoid doing anything about! Abortions the majority of the time, are done for purely selfish motives, not because of rape or incest but for convenience.

Ask not for whom the bell tolls - it tolls for you America!!!

Because the majority of people in this country stood by while millions upon millions of babies were led to their slaughter-Now the angel of death -via our president and our government is going to come for us, the elderly. Now they will kill the elderly for convenience sake!

From the cradle to the grave-the government will rule as if it were God!

Think about it for a second....when those, who will be slaughtered under the presidents new medical plan, were able 20-30 years ago, did they cry out against the abomination of abortion-for the most part -NO-now the angel of death shall come for them, because when God called them to action, they would not listen, they turned their backs!

Proverbs 24:11-12
11. If thou forbear to deliver them that are drawn unto death, and those that are ready to be slain;
12. If thou sayest, Behold, we knew it not; doth not he that pondereth the heart consider it? and he that keepeth thy soul, doth not he know it? and shall not he render to every man according to his works?

Will there be a pay day America?-Yes there will-God shall recompense all the evil upon the heads of those who pursue it.

If you consider this harsh, yes it is harsh, but it is the Truth, you may stick you head in the sand when they take your mother, or grandmother, but you will give account in the day of judgment...for America you know the truth, and you have turned your backs on God,

....May God show Mercy yet on America!

The following word the Lord gave me was first posted here in Oct. 2007, but it bears reading if you have the time : Thursday, October 11, 2007

Post script 2009:
The government would now rule us from the cradle to the grave: Now our president would come for the old people, those whom he considers less productive members of society-and murder them. Blood shed follows blood shed...The country will again run with the blood of the innocent, and God will avenge the blood upon the heads of those who shed it!

All true Helen. And just as YHWH sent Babylon to destroy Yerushalyem because Menesh had filled its streets with innocent blood so shall it be in the United States. Babylon did not care about old or young weak or sickly as it conquered Mt. Tsion. And if He did that to Israel whom He loves and has entered into eternal covenant with what will He do to the United States with whom He has NOT entered into any covenant with?
Shalom B’ Yeshua,
Peter.

Yes brother God's only eternal covenant with a Nation, is with the Nation of Israel.

His "New covenant" is with those who are born again in Christ Jesus. Any of our forefathers who were under the "New covenant" as believers, were instructed of the Word to Keep His commandments.If they obeyed they would receive the promise. If they disobeyed, they received the curse....a curse we are now under in America because of our gross disobedience and disregard of and unto God..

Murder begins with the weak, the helpless and the disabled. Then, because evil lusts for blood and is never satisfied, it will turn on anyone who holds different views, or who refuses to bow down to an evil satanic regime. It can be done insidiously, too, through vaccinations, bio-warfare.....etc I praise God that although His Word warns us of the sorrows to come, like never before on the earth (the inevitable consequence of man's sin and evil), He will reign victorious, and will come for His own. Hold fast to what is good, and don't let your faith or love turn cold dear saints. Amen!